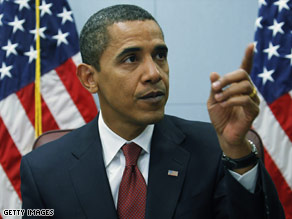 President-elect Barack Obama says details of the stimulus package will be posted online.

"We are going to ban all earmarks, the process by which individual members insert pet projects without review," Obama told reporters after a meeting with his economic advisers.

Obama said that getting a handle on the country's skyrocketing budget deficit must begin with the economic stimulus plan, and that the plan must include changes in the way Congress does business.

"We're going to be investing an extraordinary amount of money to jump-start our economy, save or create 3 million new jobs, mostly in the private sector, and lay a solid foundation for future growth," he said. "But we're not going to be able to expect the American people to support this critical effort unless we take extraordinary steps to ensure that the investments are made wisely and managed well."

As Obama spoke on his plans to stimulate the sagging U.S. economy, the Federal Reserve predicted that the economy's deterioration is likely to continue through this year, with unemployment rising into 2010.

Banning earmarks -- usually pet projects of Congress members inserted in money bills unrelated to the projects -- is one of several steps the president-elect wants to take with the stimulus bill.


Obama said he will set up an oversight board "to identify problems early and make sure we're doing all that we can to solve it." And, he said, Americans will be able to monitor online where the stimulus money is spent.

"But we're not going to be able to stop there," he said. "We're going to have to bring significant reform not just to our recovery and reinvestment plan, but to the overall budget process, to address both the deficit of dollars and the deficit of trust.

Obama met with key Democratic and Republican congressional members Monday, and leaders from both sides of the aisle were optimistic after the meeting.

Republicans, however, cautioned that they are interested in seeing significant tax cuts in the plan and expect to provide significant input into the process as well.

"This potentially $1 trillion bill would be one of the largest spending bills in U.S. history. It would increase the deficit by half a trillion dollars overnight and deepen an already enormous national debt," Senate Minority Leader Mitch McConnell, R-Kentucky, said. "Before we all agree to it, the American people need to see the details.

"They need to be able to see for themselves whether this is money well spent. And if lawmakers think that it is, then they need to make a convincing case to the people who are paying for it," he said.

The president-elect is scheduled to deliver a major policy speech on the economy Thursday.